Did you hear a loud "boom!" You may have heard bombs being dropped during training at the Pinecastle training range. The Pinecastle Bombing Range Complex located in the Ocala National Forest near Astor, FL. The Pinecastle Impact (Bombing) Range is an fenced 5,760-acre area, with the eastern edge of the range located about 2 miles west of State Road 19 and the Camp Ocala campgrounds, and one-half mile west of the Farles Lake campground. F-18 jet fighters and other aircraft take off from Jacksonville Naval Air Station, fly low over the Forest, and drop their bombs in the middle 450 acres of the range. Pinecastle is under the operation and jurisdiction of Naval Air Station Jacksonville in Jacksonville, FL. The range is the only place on the East Coast where the Navy can do live impact training. The Navy drops nearly 20,000 bombs a year at the site, a few hundred of which are live.

The pilots that train here now are practicing for targets in the Middle East. Cargo containers simulate the residential targets that they might have to bomb. "F/A-18 Hornet jet fighters and other aircraft take off from Naval Air Station Jacksonville or from aircraft carriers off the Florida coast, fly low over the forest, and drop their bombs in the middle 450 acres of the range," according to an announcement in the Ocala Post. Collectively, they drop 20,000 bombs on this range every year—most of them filled with clay, concrete, or iron, but several hundred of them still live. Pilots are scored on how well they hit their targets.

F/A-18 Hornet jet fighters and other aircraft take off from Naval Air Station Jacksonville or from aircraft carriers off the Florida coast, fly low over the forest, and drop their bombs in the middle 450 acres of the range. All air-to-ground exercises using conventional ordnance up to and including 500 pound MK 82 bombs and five-inch Zuni rockets are authorized.

The Navy’s Pinecastle Range is located in the Ocala National Forest near Astor, Florida in southeast Marion County. Just over a military owned location referred to as Camp Ocala inside the junctions of Florida SR 40 and Florida SR 19 just west of Alexander Springs at the border of Volusia and Lake counties. 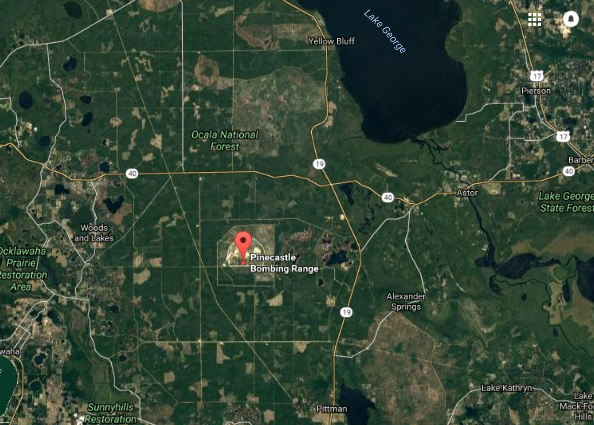 There are nine targets within the Pinecastle complex:

Napalm and High Explosive Incendiary (HEI) are prohibited. Live ordnance is restricted to the Live Ordnance Impact Area; inert ordnance is used on all other targets.

Pinecastle targets have also been certified for laser operations. The Navy has used the area for target practice for 50 years under a special use permit from the U.S. Forest Service.

Visit https://www.cnic.navy.mil/regions/cnrse/installations/nas_jacksonville.html and look under "Schedule. Navy training schedules indicate that live and inert bombing will take place at the Pinecastle Range Complex located in the Ocala National Forest the following day and time:"

Take from a GAO report "Navy's Bombing Practices at the Pinecastle Electronic Warfare Range in the Ocala National Forest, Florida document B-178547: Published: Aug 30, 1973. Publicly Released: Aug 30, 1973." That document is online at http://www.gao.gov/products/B-178547.

The War Department (WD) acquired 40,587 acres for the former Lake Bryant Bombing and Gunnery Range in the early 1940’s. On 27 June 1941, the WD acquired use of 23,167 acres for an Army bombing and gunnery range by means of a temporary use permit from the United States Department of Agriculture (USDA). By two Memoranda of Understanding with the USDA, the Army acquired more land in the same area: 3,354 acres by transfer and another 14,066 acres by conveyance bringing the total to 40,587 by 11 January 1943.

During World War II, the Lake Bryant Bombing and Gunnery Range was utilized by the United States Armed Forces Command and was under the jurisdiction of Pinecastle Army Air Field and the Orlando Army Air Base. The site was also known as the Ocala Bombing Range, the Ocala Bombing and Gunnery Range, and Ocala Aerial Bombing and Gunnery Range, and Ocala Range. The site was used for practice bombing (including the use of HE/GP bombs), AAF Board Projects, ground gunnery and rocket missions. There were also training facilities for fire fighting details. Observation towers were constructed on the site along with a camp area for the fire fighters.

At the conclusion of World War II, the WD determined the site was no longer required. It was declared surplus 2 December 1956. The entire 40,587 acre site was relinquished back to the USDA by letter of transfer dated 20 May 1947. Of these 40,587 acres, 5,765 acres are not eligible for the DERP-FUDS program because the Navy currently utilizes these acres for an active site, the Pinecastle Impact Range.

The North Bomb Target was one of the original range locations and was intended for practice bombing. It was a cleared circular area about two miles in diameter. Historical aerial photography shows a considerable amount of ground disturbance. This entire target area, with the exception of a portion along the northern edge outside of the present-day Navy range, is included in the currently active US Navy Pinecastle Target.

In some cases you will need a Military Air capable police scanner or radio monitor to intercept these communications. See http://wiki.radioreference.com/index.php/VHF/UHF_Military_Monitoring

Frequencies possibly in use: